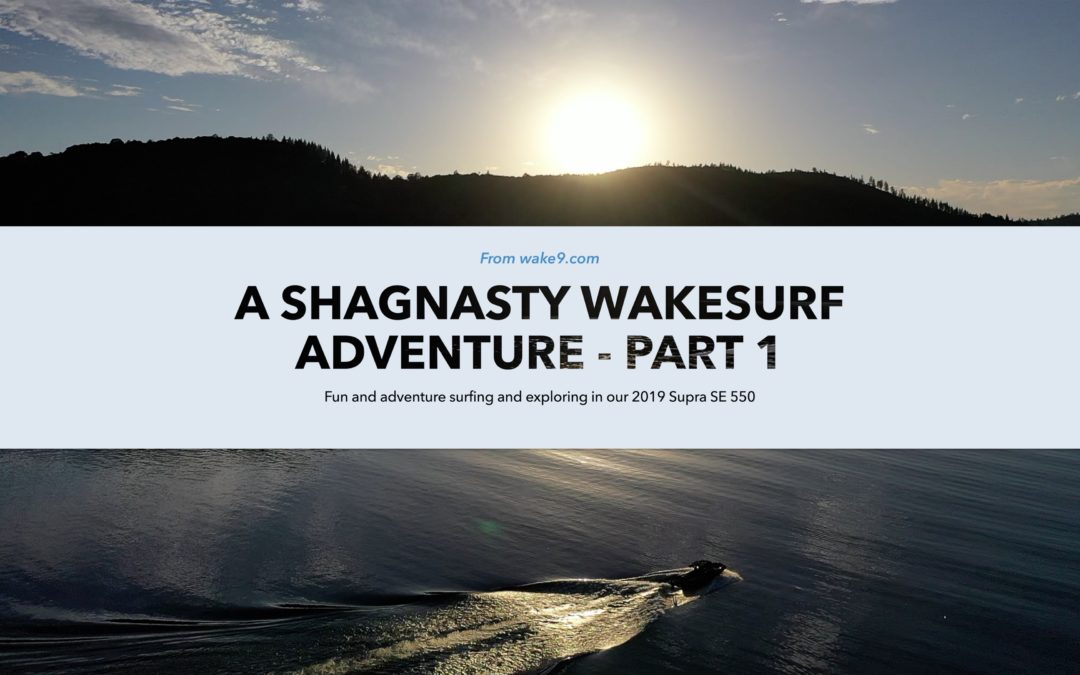 A Shagnasty Wakesurf Adventure with our Supra SE 550

Well its been a minute but I am looking forward to sharing our adventure and telling this story. We got hit hard with bad weather at the end of our trip in Tennessee, and then had to pass through 1 blizzard and another snow storm on the Donner pass. We got home to heavy rains and flooding conditions followed by red flag warnings and PG&E blackouts. Yeah, for reals. So this is part one of our yearly adventure to Tennessee to pick up our new Supra SE 550. And yes, we will discuss specific setup details for this boat and stay tuned to the end for information on some other stuff we are working on.

After the fire we were so READY to get into warm weather and start surfing again. But add to that this beautiful huge sexy boat, and we were giddy. Our adventure started by getting to the Supra factory in Maryville, Tennessee and picking up the SE 550 and starting to transfer our gear. The plan was to pick up the boat on thursday afternoon, and then we had some top secret testing to do for the factory on Friday. We were then going to dial the SE 550 in for the first time on Saturday, and head to our rented lake house, known as Wake Dreams, on Sunday. Well RJ is usually my main brostank for the first dial in session but he wasn’t going to be here until Tuesday. So I had an idea and decided to invite two great wakesurfing friends of wake9. My best brogal Allison Sos from home, and our favorite local Tennessee rider Raya Walker.

So we went to Tellico Reservoir for our testing which we thought would take all afternoon but it did not and we were done with about 2-3 hours of daylight left. Amy and I were tired and hungry and had already surfed and were thinking about saving the SE for tomorrow, but not Ally. She was so stoked to ride the SE she wouldn’t take no for an answer. To be honest, she never really even asked she literally just got in the boat told me to “back her up, bro”. Her enthusiasm made us smile and so I did what I was told. We have this rule in our family, even when you don’t feel like it, get out on the boat. When you are on the boat, even when you don’t feel like it, get in and surf. We all try to follow this principle and it has never failed us when we do. So glad for Ally on this evening, it was gorgeous and the conditions were great with a water temperature of 74º, and that wave. Of course we rode and loved the wake when we first rode the SE 550 back in September, but all winter I was thinking I needed to set it up different. In September we had a lot of peeps and 1000 lbs of lead and ran with about 6.5-7.5º of pitch. I figured even though the wake was great, I wanted to try less lead and more pitch. So based on gut I put one bag of lead in each FAR corner of the rear surf locker, 2 bags on each side in the bow and then 600 lbs spread evenly right in the middle just behind the driver’s seat on both sides totaling 800 lbs. Well, the wave was great and better than it was in September. We were running a pitch of about 8.5 degrees, speeds of 11.2 – 11.6 and 2.5-3 degrees of roll for goofy, and about 2.5 degrees of roll for regular. Allison normally hates riding faster than 11.2, and always makes me slow down, but she was doing great at 11.6 and didn’t ask me to slow. She immediately felt out the wake with a bottom turn and start smiling and talking about how great the transition was. The transition was also great on the SL, but this wave on the SE actually has more push, that great transition, a firmer wave, and a better lip for launching. She was busting HUGE airs on her first session, and this is also the beginning of the season. We had 200 lbs less in the boat, and many less people than in September. It was just the four of us, and the wave was better than before. We were so stoked for our vacation and the rest of the summer. We closed down the lake as is our custom headed for a late dinner and couldn’t wait for our adventure the next day and joining with Raya.

I know this is already long but I have to take a minute to explain where I got the idea for what I wanted to do the next day. The year previous we stayed with the Walkers in Crossville, Tennessee and they shared a video with us. It was called “The Voyage” from Malibu and it was about this amazing adventure. An expedition of wake and pontoon boats wakeboarded from knoxville tennessee all the way to the Gulf of Mexico never leaving the water. I didn’t know that was even possible and they did it by traveling through these huge locks in several dams along the way. These locks are designed for larger ships. Maybe some day I can plan an adventure this grand, but for now, I was determined to surf on both sides of a dam and use the lock in my wakesurf boat.

So based on some research and some good advice we found that we could launch in a spot and surf 3 lakes without leaving the water. We were going to launch from the Tellico Dam Reservation Boat launch, which made no sense because we didn’t need a reservation. This puts us in Tellico Lake, then we can go through a canal and enter Fort Loudoun Lake, and then we could use the lock in Fort Loudon dam to head into Watts
Barr lake, and then back through the dock and home. I was very excited and Ally shared my enthusiasm. When we spoke to Raya, however, she didn’t want to do the lock and said it was scary! Well, we talked her into it for now and headed to the Tellico Dam launch.

So we started on the lake just fine and it was starting to get gloomy. Raya thought we were nuts but she was a trooper and went along, even if a bit reluctantly. It started to rain and Jessie and Amy wanted to surf in the rain and so they did, what a blast we had. It started to thunder and rain HARD, and its probably a good thing Raya was with us keeping us from being too dumb. The rain then got so bad, I couldn’t see with my sunglasses on, and then with them off the rain actually hurt my eyeballs. OK, maybe it was time to head to shelter in those covered slips the old fisherman told us about. We found them and huddled into a houseboat slip for a while and checked the radar. Well, look at that. This huge weather system with two, yes two swaths of deep purple and we were in the first one. Just like the fisherman said, Shagnasty weather, twice!

Thats enough for this video but stay tuned for part 2 where we show you what it was like to go through the lock and surf on the other side with Raya and Allison surfing like they were competing back in the Endless Wave Tour, it was so much fun. Then we will share our stay at Lake Norris and then finally getting the SE 550 back to a beautiful full lake at Oroville, which only happens about once a decade.

We are also working on a video with tons of information on how we dial in a wakesurf wave focusing on surf system boats. I will go into great detail and share all of our knowledge.